The Circle of Life Goes On

Steven took several trips to Japan to attend AKIHO shows and to meet breeders in 2017. While most of the Europeans and South Americans spend a huge amount of money on Meiyosho and Tokuyuu winners, and a lot of uninformed Americans buy from what can only be considered puppy farms from overseas, we actually prefer our branch members to look at the smaller kennels. They are the backbone of AKIHO and often do not spend time or money on advertising their kennels. They breed with intention, not to make money, but to improve the breed. Most of them do not breed more than one or two litters a year so they do not inundate the breed fancy with popular sire lines that so often carry illnesses. We encourage our friends and branch members to consider the smaller kennels and not get caught up in the commercial enterprises of the bigger names. Steven traveled Japan, visited several kennels and brought back lots of Akita-related gifts. He somehow resisted Judy’s hints to bring back another puppy.

In addition to Steve’s trips, Judy spent a lot of time traveling domestically to attend AKIHO and JACA events. If there’s a regional or local cherry blossom festival, meetup, Pet Expo, or picnic where either or both clubs are involved, Judy is there. From Seattle to Nashville to NorCal to SoCal, Judy always enjoys catching up with friends and club members but also gets to see the Akitas, some of whom came from Junketsu Kennels. So it often ends up being a family reunion of sorts. As a breeder and cabinet member in both clubs, she is also a great ambassador for people who want to learn about Japanese Akitas.

Apart from accumulating frequent flyer miles, the Junketsu family sadly lost three dogs this year. Fathead and Yumi both made it to their 15th birthdays in July. But Fathead left this world a few days later. We think he stayed around just for the party as a gift to his humom Judy. Remember that Fathead was adopted into the Junketsu family late in his life. Judy and Steve more than made up for his previously precarious living situations. He had his own bed, his own room, adventures to parks, the beach, restaurants, university campuses for walks and came to club events as well. But it was his time to go and he went on his own terms when he was good and ready, which is exactly what all who knew him wanted for him.

In late November, Waka also departed this world at just 10 years of age. No one knew that Waka had a hidden medical problem that proved to be deadly, not even her vet. There was no indication that she was ill, especially since she had just been to the vet a few weeks prior for a routine check up and all was good. So it was a shock that she died suddenly from an undiagnosed hemangioma sarcoma (a tumor) near her heart that had ruptured. It all happened so fast and no one was prepared to say goodbye. Maybe Waka was meant to be like a glamorous starlet who went before her time. The truth is, the older she got, the better Waka looked. Her coat was plush in texture and rich in color, her eyes had a sparkle, she still enjoyed jumping up to get persimmons from the tree, going out for walks and meeting admirers at educational events. Waka was as sweet as can be. Because Waka was the dam and grand-dam to a few litters, the extended Junketsu family was heartbroken. Waka’s passing leaves a huge hole in the household, not just for Steve and Judy but for her best buddy Kita and all the other dogs too. It is not an exaggeration to say that Waka was the heart of Junketsu Kennels. It’s comforting to know she leaves a legacy behind.

If Waka was the heart of Junketsu, we can say that Yumi was the genesis for everything. Yumi’s passing occurred just a couple of weeks ago. Yumi outlived her littermate Fathead by a few months; she surprised everyone and even outlived Waka. Usually, the life expectancy average for an Akita is 10-12 years. Anything beyond that is truly a blessing. Yumi was Judy and Steve’s very first Japanese Akita, so naturally she holds an exceptionally special place in the Junketsu family, but even beyond that, Yumi is the reason why the Takamatsus became active in AKIHO North America and JACA. We all owe the lovely and mild-mannered Yumi a debt of gratitude and love. All three of our dogs will be sorely missed. 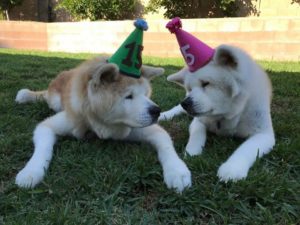 But it’s not all sad news as we end one year and begin a new one. It’s the Year of the Dog in the Lunar Calendar. What better way to start it than puppies? Our beautiful foxy Mikan whelped a litter of two little girls (that seems to be a trend around here these days). Their current call names are Kocha and Mugicha, which means red tea (which is what the Japanese call black tea or English breakfast tea, and if you really think about it, black tea is not black—it’s actually red) and barley tea. We think those are very appropriate names given their color.

So lately, it’s like that “Circle of Life” earworm song from the Lion King–a bit bittersweet. We miss Kuma Fathead, Yumi and Waka horribly, but we are grateful and happy about Kocha and Mugicha. And life goes on for our other dogs as well. Kita is still his happy-go-lucky and friendly self, Emi and Kaki are both living the life of luxury as all ladies in their mid-life should be, and Gobo is still our bratty boy who loves his mama. Gouya continues to do very well in nose work class. He is so happy with himself when he finds what he’s meant to be looking for but he gets impatient waiting for his treats so he can move onto his next search. Mikan is presently taking a break from nose work class at this time, as she is much too busy being an awesome first-time momma!

That’s it for now. We have the JACA Nihon Ken Invitational and AKIHO North America shows coming up so if you decide to attend, please feel free to say hello!